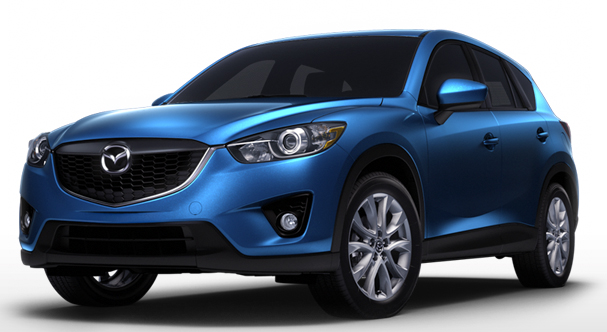 Introducing a feat of engineering previously thought to be impossible: the crossover without compromise. Not only does the Mazda CX-5 offer confident driving, versatility, all-weather capability, spaciousness and advanced features, but it does so with the best Highway MPG of any SUV in America—including hybrids. To make this possible we developed an engineering philosophy called SKYACTIV® TECHNOLOGY, including a new 2.5L SKYACTIV®-G gasoline engine, which reimagines every component to work together in unprecedented harmony. Brochures & Downloads

The 2013 CX-5 isn’t the first compact crossover SUV from Mazda, but it might as well be the best. With this all-new, athletically minded and generously equipped compact SUV, Mazda gets the recipe right.

Starting with an all-new unibody, Mazda’s engineers set out to combine a relatively roomy interior, sharp driving dynamics and a lightweight overall package. The 2013 Mazda CX-5 will be initially offered with one fuel-efficient engine, a sophisticated 2.0-liter direct-injected four-cylinder making 155 horsepower and 150 pound-feet of torque. EPA-estimated fuel economy is 29 mpg combined with front-wheel drive, putting the CX-5 at the top of its class for efficiency.

Choosing a vehicle in the compact SUV segment can sometimes mean settling for less when it comes to modern amenities. Not so with the CX-5. Even on the base trim, an impressive list of standard equipment will keep budget-minded consumers happy. Moving up the range will naturally net you a more comprehensive roster of equipment, with the top-of-the-line Grand Touring equipped essentially like a luxury model.

In terms of storage and cargo capability, the CX-5 is on par with its competitors. The base model CX-5 Sport has 60/40-split-folding rear seats, but for those who enjoy four-up skiing and snowboarding, the Touring and Grand Touring models feature a special 40/20/40-split-folding rear seat to accommodate long objects in the cargo area. Maximum cargo capacity is class-leading.

Unlike the Mazda Tribute, the CX-5 compact SUV that takes its place has no Ford roots. It comes with front- or all-wheel drive and a high-tech four-cylinder engine. An automatic transmission is optional on the CX-5’s base Sport trim level and standard with the higher Touring and Grand Touring trims. The automatic is also required with all-wheel drive. At a press preview ahead of the car’s early 2012 launch, I drove front-drive prototypes with both transmissions and couldn’t be more satisfied.

The 2.2-liter four-cylinder diesel, the latest member of Mazda’s new Skyactiv family of fuel-saving powertrains, will go on sale next spring in Japan, where its first application will be in the Mazda CX-5crossover.

In the U.S., a Mazda spokesperson, responding to a query from Inside Line, said: “While I cannot divulge which Mazda vehicle will be outfitted with the Skyactiv-D 2.2L diesel for the U.S. market, I can say to expect that vehicle within the next 18 months.”

Equipped with an idling-stop system, the Skyactiv-D 2.2 in the CX-5 will develop 310 pound-feet of torque, while returning average fuel economy of 44 mpg on Japan’s JC08 test cycle.

Posted by Josh Martin on December 1, 2012 in Automotive